If I wrote this post yesterday, it would be unrecognizable.

Yesterday, on the eve of my youngest child’s first day of kindergarten, I was a teary anxious mess. Internally. Outwardly, I was holding it together. By a thread.

I kept having these dual and seemingly contradictory thoughts:

We spent our last official “Mommy Day” at one of his favorite places, the Crayola Experience, playing with model magic and posing for silly pictures beneath a cascade of melted crayons. 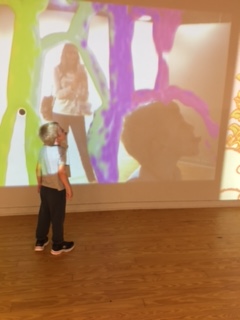 I tried my best to remain present. Not checking my phone or thinking about the udon soup I planned on having for lunch. Instead I inhaled his sweet smelling head and tried to snuggle him as we rolled out clay and cut them into shapes.

“Stop it, mom,” he said with a smile, pushing me away. I went in for more and he put up his hands.

I watched two moms enter the room with their matching set of children, a toddler and a baby each. They held their infants while attempting to reign in their antsy three year olds. One toddled off toward us, pausing to stare at Leo, who was too busy cutting out gingerbread men to notice. I thought about how not so long ago I’d been one of those moms, but now I felt the distance expand as I drifted out of that frame and into another.

After finishing up at Crayola, we left for our respective treats: for Leo, a frozen yogurt topped with M+M’s, and for me, a bowl of steaming hot udon and veggies. A couple bites in, I felt my throat tighten up. After a few more, I could barely swallow. Here I was, getting what I wanted, and yet, I felt no pleasure.

I wondered if tomorrow’s milestone would feel similar. After years of aching for a quiet house and time to myself, I was about to get exactly that, but I had no idea if it would leave me feeling hollow or filled.

Turns out, both. It’s always both.

This morning I woke early, making lunches, filling backpacks, with enough time left over to make a batch of pancakes. Leo had a hard time getting out of bed, my bed, where he had appeared sometime in the night.

“I’m scared, Mommy,” he said, burrowing beneath the sheet. “I don’t want to go to school.”

“I know, honey,” I said, giving him a snuggle before luring him downstairs with the promise of Mickey Mouse shaped pancakes.

And then it was time. Sneakers on, backpacks slung onto shoulders, and out the door.

My husband said, “how about a first day of school picture?” and I froze, thinking Leo might refuse, or suddenly realize the thing he had feared all summer long was actually happening. Maybe he’d cling to my leg like so many preschool mornings, or run back into the house. But to my surprise he smiled and posed with his sister. 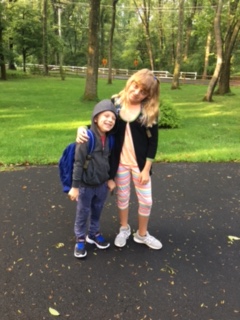 Then the bus slid into view. I put my phone away, too nervous for photos, afraid that trying to capture this pivotal moment would somehow jinx it. I had led myself to believe it might not actually happen. Maybe he wouldn’t get on the bus. But it was. Happening. We crossed the street, his sister leading the way.

My baby got on that bus and sat down, disappearing from view. My husband and I stood at the end of our driveway, watching the bus begin to pull away.

We waved, and to my surprise, my son’s face appeared. His sweet smile framed by the window, and his hand mimicking ours, and then he was gone.

I felt a swell of emotion begin to rise, but when my husband asked, “Are you okay?” it subsided. Tears reversed. All the worry and anxiety had melted away, leaving me feeling empty, but not in a bad way.

My world is changing along with my children’s. I don’t have babies anymore and this is both a relief and a grief. We graduated that stage, albeit a little reluctantly on my part, and my son’s.

We’d been clinging to each other rather tightly these past few years. Perhaps because I suspected he was my last, I’d been holding on a bit too hard, or maybe it was just the right amount.

But this morning I let him go, and then, hours later, he returned. My little guy bounded off the bus and into my arms, giving me the tightest, sweetest hug.

I don’t know what tomorrow will be like, or next week, or next year. I don’t know how or if my heart will break or swell when I drop him and his sister off at college. 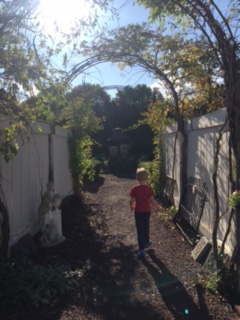 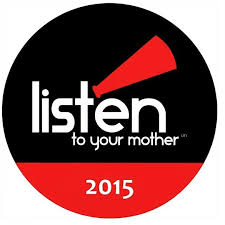